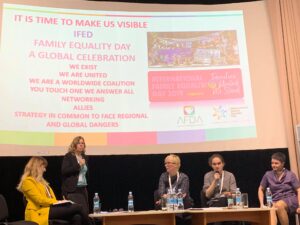 I am a lawyer, Master in geopolitics and strategy, activist for the human rights of LGBT + people and family diversity. I am the president of AFDA – Familias Diversas Civil Association, an NGO based in Argentina dedicated to eliminate the barriers that exist to achieve real equality and non-discrimination for families led by LGBT+ people through concrete actions with social impact.

Within my experience as an activist is the defense of the rights of trans people in the judicial instance for the recognition of gender identity, prior to the enactment of the gender identity law in my country.

Together with other activists we founded Familias Diversas Civil Association to increase visibility and promote the modification of public policies that will help our rainbow families to access a better quality of life, spread our rights and empower our families in order that each LGBT+ person can assert their rights.
When I started being an activist none of the laws that were achieved in Argentina such as the same sex marriage, the gender identity law and the inclusion of lesbian and bisexual women in the laws of medically assisted reproduction existed. At that time my activism was focused on promoting bills, participating in parliamentary debates in campaigns to add votes in favor of the laws that gave us a legal framework of equality. One strategy to obtain the recognition of law for trans people in which I participated a lot was in the filing of claims before the court so that trans people will obtain their documents according to their self-perceived identity and also for the recognition of parental rights of both mothers when they had had a child before the same sex marriage law.

Once an important legal protection framework was obtained, I observed that in our families there were important barriers to access the same opportunities as traditional and heteronormative families and we did not have real equality and that led me to found AFDA together with other people. Now my work focuses on advocacy and visibility of the rights of our families with the legislative and national executive branch and with the provincial governments.

I am carrying out advocacy so that the non-pregnant person has a parental leave, we fight for a more equal distribution of care. Labor laws are still very discriminatory in my country.

I also focus on the right to a comprehensive sexual education where the LGBT + perspective is mandatory. I understand that working in education will make a difference for our children and also for LGBT + children and adolescents.

I am a member of the Honorary Advisory Council on Sexual Diversity of the City of Buenos Aires.

I am the Co Director of the first community center for LGBT people in the City of Buenos Aires , that will open on April and my main role there is to promote family diversity in the City.

At a regional level I was a representative of family diversity before the Second Ordinary Assembly of the Latin American Network of Rainbow Cities, held at the Government Headquarters of the City of Buenos Aires in 2018.

At an international level we are participating in the ERC 2019-2020 wich will be co chair by United Kingdom and Argentina.