A lesbian feminist activist since 1997, Ging Cristobal joined the OutRight Action International (formerly names as International Gay and Lesbian Human Rights Commission (IGLHRC)) in 2008 as Project Coordinator for Asia and the Pacific. She was the main writer and researcher of the SOGIE report for the Philippines during the Philippines ICCPR review in 2012, as part of a 2-woman Asia program team, they produced the video documentary, “Courage Unfolds: LGBT Activism and the Yogyakarta Principles in Asia”, and have coordinated the research on violence on LBT persons with five partner countries in Asia. Ging has been a technical advisor of UNDP Being’s Asia regional project LGBT in Asia, and is acting Chairperson of the Quezon City Pride Council, instrumental in having the anti-discrimination ordinance passed in Quezon City. Ging is one of the co-founder & member – ASEAN SOGIE Caucus, a coalition of LGBT groups in Southeast Asia advocating for the inclusion of sexual orientation and gender identity (SOGIE) in the ASEAN. Work is focused on issues on domestic and family violence, police education on LGBTI rights, LGBT migrant workers in ASEAN and legislative advocacy work an ASEAN.

A member and former vice-chairperson of the Board of Trustees of Amnesty International – Philippines, prior to that, she was the Executive Director and one of the founders of the Lesbian Advocates Philippines (LeAP!), Inc. where she wrote and did the first research on sexual and reproductive health of lesbian in the Philippines titled, “Hidden Health: Exploring the Knowledge, Attitudes, Beliefs and Practices of Filipino Lesbians on Sexual and Reproductive Health” and as one of the documenter and writer of the documented discrimination cases of lesbian in the Philippines in the book titled, “Unmask: Documentation of Violence Against Lesbians in the Philippines.”

Ging has lobbied for laws to protect LGBT rights as one of the members and founders of the Lesbian and Gay Legislative Advocacy Network (LAGABLAB), a local network of LGBT organizations and individuals engaged in legislative advocacy and lobbying for laws recognizing LGBT rights, particularly the anti-discrimination bill that has been languishing in Philippines Congress for last 17 years. She was also one of the founders and active members of Task Force Pride, the local network engaged in organizing the annual LGBT Pride event in the Philippines, of the Asia Pacific Rainbow, a regional LGBT organization, and a former member and party list nominee of LADLAD, a national LGBT political organization for LGBT people in the Philippines. 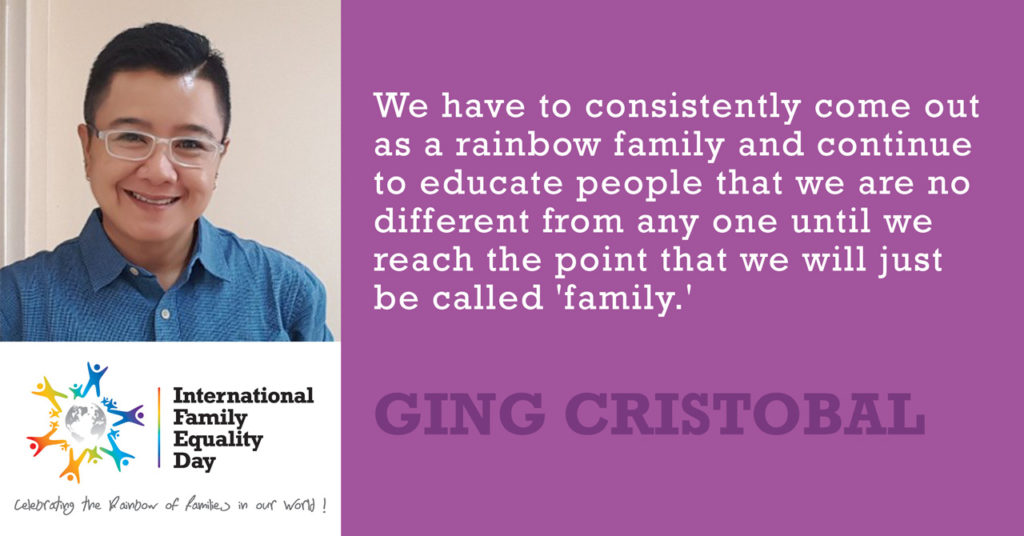