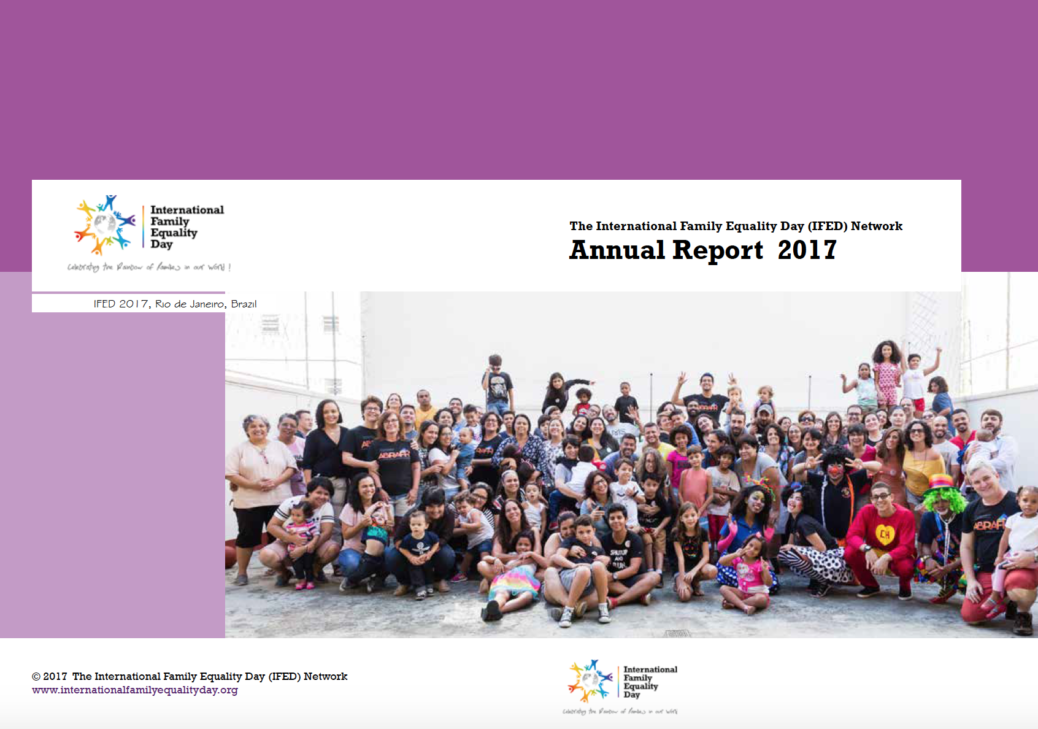 International Family Equality Day 2017: The report is out!

IFED PRESS RELEASE: 12 October 2017
This year’s edition of the International Family Equality Day (IFED) was another great success. Extensive information on the various IFED-celebrations in over 100 cities worldwide can be found in the recently published Annual Report – 100 pages full of family diversity, ready to be discovered!

On 7 May 2017, the 6th International Family Equality Day (IFED) was commemorated worldwide in order to celebrate the beauty and importance of family diversity and to promote equality for each and every one. This year’s IFED-motto was as simple as striking: «LOVE MAKES A FAMILY». Rainbow families and LGBTIQ* family organizations came together in a record number of 44 countries and over 100 towns to show solidarity with same-sex parents and their children. «We are very pleased that with Argentina, Belize, Brazil, China, Ireland, Luxembourg, Thailand and the Philippines, eight new countries joined the IFED-family this year», says IFED Coordinator Maria von Känel.

Joy, love, devotion
As a result, the IFED Annual Report 2017 is stronger and more extensive than ever. On the one hand, it highlights the numerous and joyful IFED-celebrations in countries such as Belgium, Israel, Italy, Japan and the United States. The photos and stories featured in that section reveal in a heart-warming way the love and devotion same-sex parents bring to parenthood.

Useful information
On the other hand, the document contains detailed information on a vast number of human rights initiatives and LGBTIQ* organizations fighting for family equality worldwide. Also, it provides the reader with Best Practice Guides and annual reports put together by NGOs from participating countries. In Australia, for example, over 500 people gathered in Sydney Park on May 7 to celebrate IFED. «There were so many free activities for children, with jumping castles, face painting and lots of arts and crafts activities», writes Jacqui Tomlins, a Rainbow Family and Australian Marriage Equality campaigner.

A closer look
Furthermore, the Annual Report 2017 includes special features on countries such as Argentina, Belize, Brazil, Croatia and Ukraine. Therein, readers learn about the legal, political and social situation in the respective states with regard to LGBTIQ* rights.

Impressive testament
«We are very proud of the Annual Report», says Maria von Känel. «It is not only a helpful source of information, but also a colorful summary of and impressive testament to the countless endeavors by activists, families, human rights defenders and decision-makers. Their tireless efforts do not only raise awareness for the difficulties often faced by same-sex parents and their children. They also raise the visibility of rainbow families and help to empower and encourage them.»

Next year’s IFED will be held on May 6, under the motto «Children’s Rights Matter».