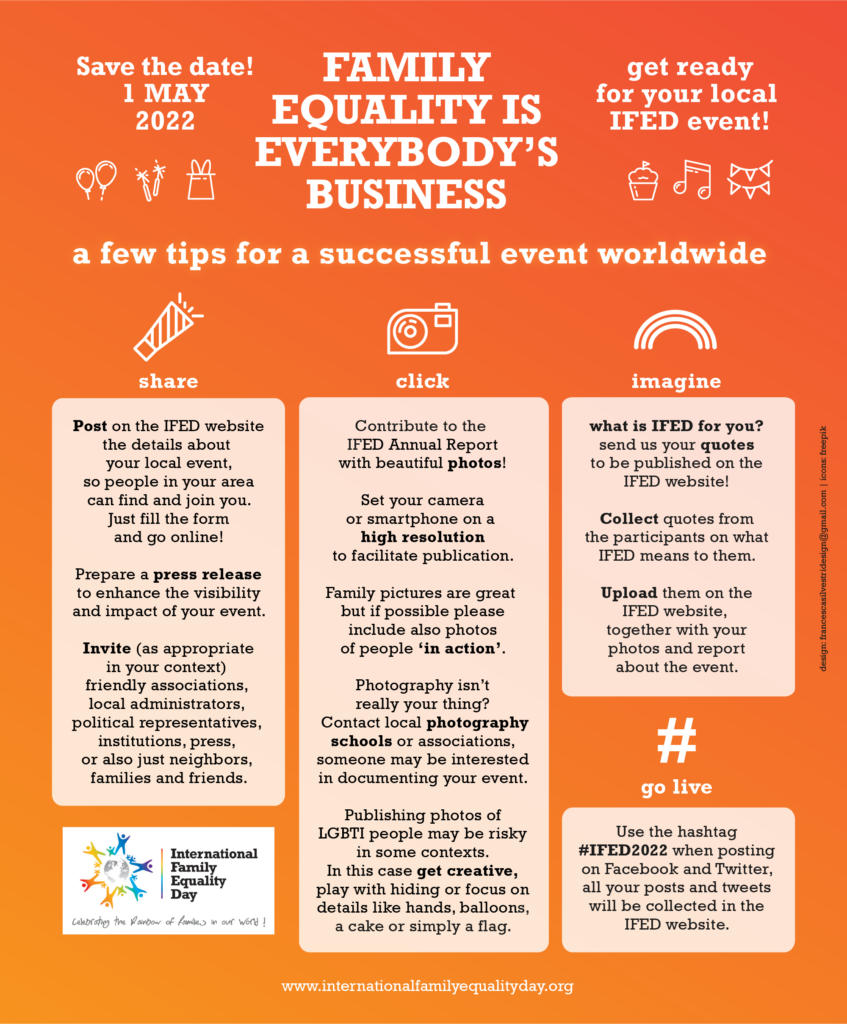 The International Family Equality Day (IFED) Network invites all rainbow families and their friends and advocates, as well as institutions, NGOs, family organisations and politicians from across the globe, to enjoy this wonderful day and feel the empowerment of this global event. See you in 2023!

Don’t hesitate to contact us if you would like to edit the IFED-Logo in your language. Request *ai IFED-File

Everybody is welcome to contribute to the IFED Annual Report 2022.
Send Pictures/Text

How you can contribute In 2015 the Congress adopted by majority vote a resolution on „Guaranteeing lesbian, gay, bisexual and transgender (LGBT) people’s rights: a responsibility for Europe’s towns and regions“

The resolution invites local and regional authorities to commit to diversity policies inclusive of LGBT rights, to work closely with LGBT advocacy organisations and human rights NGOs, to promote good practice through networks such as the „Rainbow Cities“ and to ensure the delivery of discrimination-free policies and services. The report mentioned for the first time the importance of celebrating International Family Equality Day (IFED)  under local activities aimed at raising awareness to promote a tolerant and cohesive society.

The resolution was put forward on the basis of Yoomi Renström’s (left) report to the Current Affairs Committee. Maria von Känel (right) – founder, coordinator of the IFED Network and editor of the IFED Annual Report:

“This is a fantastic day for rainbow families worldwide. I am very happy that the representatives of local and regional authorities in Europe recognise the importance of celebrating diversity, including family diversity, and that they have included IFED among the list of activities that can be developed locally to promote a culture of acceptance in our towns and regions.”