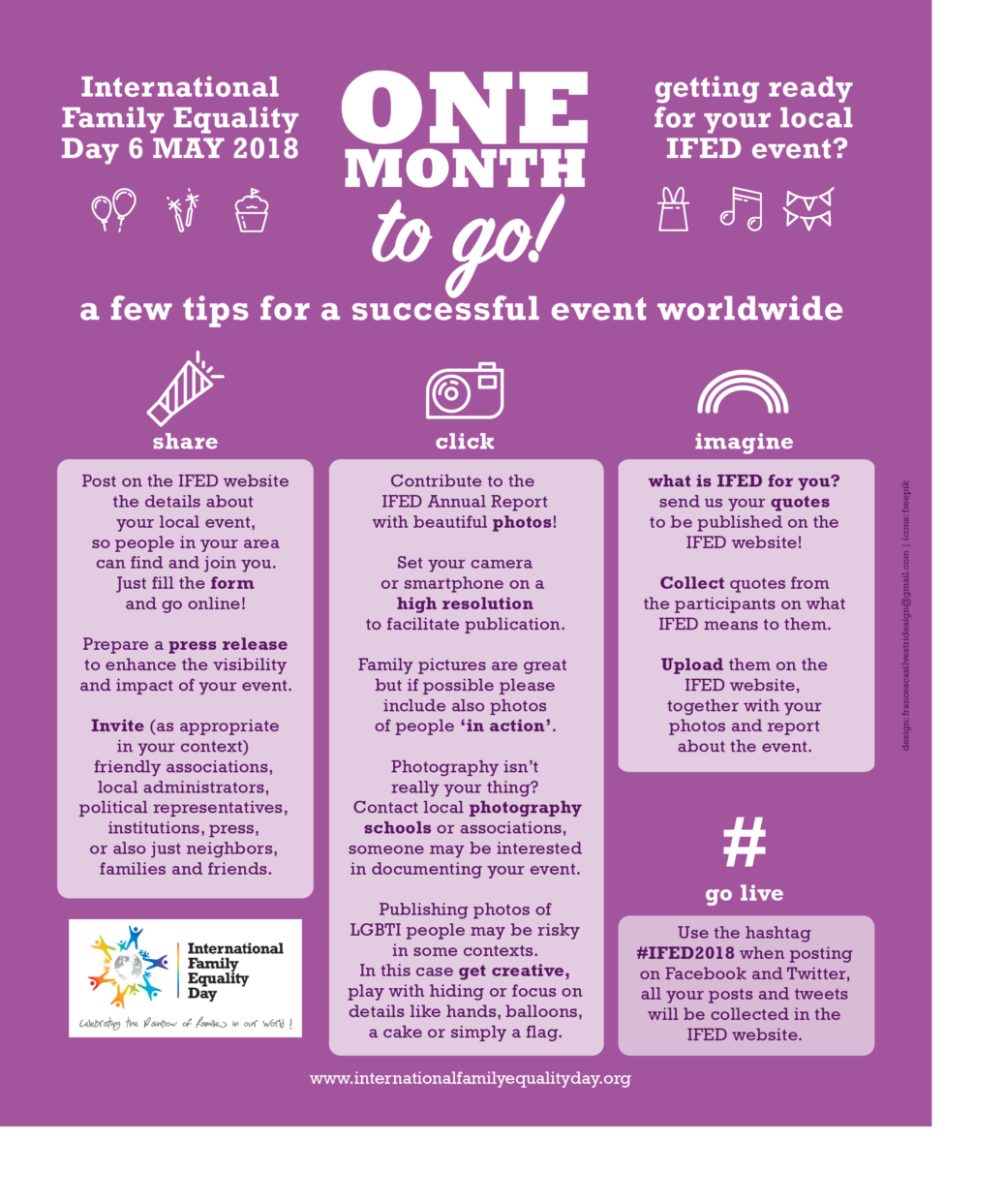 Children’s rights matter: Only one more month before the International Family Equality Day will be celebrated all over the world again. In Buenos Aires, also government officials are joining in.

Every year since 2012, the first Sunday of May has marked the celebration of the International Family Equality Day (IFED): a colorful and joyous day on which LGBTIQ* parents and their allies across the globe not only show solidarity with each other, but also promote equality for all families. Last year, the IFED was commemorated in 44 countries and over 100 cities. This year, even more countries such as Chile, Taiwan and Fiji join the IFED-family.

This year’s IFED focuses on the rights of children growing up in rainbow families. The motto “Children’s Rights Matter” is set to draw attention to the fact that in most parts of the world, children with LGBTIQ* parents do not enjoy the same rights as children in traditional families. They are oftentimes suffering from their lack of proper legal protection, being left to live in legal limbo.

A life in liberty, dignity and equality

In Chile – for example – children of same-sex families have long been ignored throughout history, explains Claudia Amigo, organizer of the IFED Chile. “Our kids are born into families that have opted to take on the most important mission of our lives: to love, respect and raise our children”, says Amigo. “That alone is an enormous task. On top of that, we fight against a legal system that strips our children of their birth-given right to a life in liberty, dignity and equality.“ For Claudia Amigo, as for many other LGBTIQ* parents, the goal is clear: “We are not asking for much. We only demand equality for our children.“ In this fight for justice, the International Family Equality Day serves as a means of encouragement. “We want to empower LGBTIQ* parents and show them that they are not alone in their struggles”, says IFED-founder Maria von Känel.

This year, the efforts of the IFED-community are being officially supported by the government of the City of Buenos Aires. “There will be a public event to celebrate IFED in our city with its government joining in the festivities”, says Andrea Rivas, president of the Asociación de Familias Diversas de Argentina (AFDA). According to Pamela Malewicz, Under Secretary for Human Rights and Cultural Pluralism of the Government of the City of Buenos Aires, the City Government is pleased to accompany AFDA in hosting the IFED. “We consider this as a new opportunity to celebrate coexistence and show the world that our city is proud of its diversity.“ As Maria von Känel points out, receiving governmental support like that is crucial for the cause and enhancing the visibility of rainbow families. “By endorsing the IFED, governments send out powerful messages of inclusion and non-discrimination. We are more than pleased that the Government of the City of Buenos Aires is setting such a great example and hope that in the future, more governments will follow.“

The importance of rainbow families being noticed by the public is also stressed by Lorraine Hayles, organizer of the Aeroe Rainbow Family Festival in Denmark. “In our country, rainbow families are privileged compared to other places in the world”, she explains. “Yet, in everyday life, we still experience the burden of being different. Visibility in society and personal strength are sorely needed so that we can be open and thrive on a daily basis.“ In that regard, progress has been achieved in Croatia. “We published and presented our first picture book about rainbow families”, says Daniel Martinovic from the Croatian rainbow family association Dugine Obitelji. “The amount of positive feedback from the public was surprising! We hope that this trend will continue so that we make further advancement towards marriage equality and equal rights for rainbow families in Croatia.“